Social efficiency of employment in three sectors ? a comparison of Polish regions

Research background: Regions that are able to use their resources in the most efficient way could be perceived as valuable benchmarks when shaping socio-economic policy. The concept of efficiency, however, may be related not only to pure economic categories but to social goals as well. The economic and social spheres overlap and often have some common origins, among which, the sectoral structure of employment seems to be an important one.

Purpose of the article: The aim of the study was to compare the social efficiency of employment in three sectors in Polish voivodeships. Not only were we evaluating the relative performance of each region, but we were also paying attention to the efficiency of engagement of human resources in the agricultural, industrial and service sectors.

Methods: We adopted the DEA method to assess the social efficiency of Polish regions. We have evaluated social cohesion concerning its two output dimensions: positive, which may be described by social activity, and negative, which may be reflected in the form of social exclusion stemming from material sources. We took into account the level of employment in agricultural, industrial and service sectors as inputs in the model and thus focused our attention on the three sectoral structure of the regional economies. Our model assumed non-radial developmental paths and was input oriented (NR-CCR). The data described the 16 Polish voivodeships in the year 2015, and were extracted from the Central Statistical Office of Poland?s databases.

Findings & value added: The research conducted indicates that Polish regions which were the most efficient in terms of social integration were simultaneously those with the best economic results in terms of GDP per capita. The highest social efficiency level was characteristic for employment in the service sector, while agriculture was placed at the lowest level. The same pattern was revealed when social activity and the danger of poverty were considered separately. Thus, structural development appears to be favourable for regional economies also in terms of social cohesion, which is a factor often neglected in the literature.

Most read articles by the same author(s) 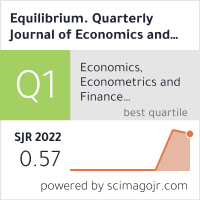 The journal offers access to the contents in the open access system on the principles of non-exclusive license Creative Commons (CC BY 4.0).